Chatting with a friend, we began discussing situations we’d overcome in the past years. I decided that I should post an image of Lemonade on Facebook to acknowledge the process of turning lemons into lemonade.

Needless to say - I did not follow through with my promise to post an image of Lemonade on Facebook and this is the story of why.

First, let me preface the story with a brief timeline:

A gentleman walks by looking down on his luck and says, ‘your lucky … flats can be fixed!’

I was in Venice 2 weekends ago working on stuff with the founders of this new clothing company and one of the founders just happened to have this beautiful painting sitting out in their lawn. I took the sec to say, ‘Wow! That painting is beautiful!‘. Little did I know that this statement would lead to a wild night and early morning!

As I was leaving after a day of data planning the owner of the painting says, ‘bet that painting would look great on a wall in your house!‘. I agreed and we decided to wrap the painting in cloth & tie to my car safe and sound … Right? Wrong! I was driving on the 10 (Los Angeles Area Highway towards Downtown LA (where I currently live) and suddenly Whoosh. The painting was flying through the air. I was initially scared that it was going to cause problems but it landed flat on the front of a semi & immediately looked to explode.

When I got home, I called the person that had given me the painting & told him what happened. We sat on opposite ends of the phone silently for a sec. Then he goes, ‘Do you remember where on the highway the painting flew off?‘. Yup (I knew)! He says, ‘Come get me!‘. I go and pick him up & we go searching for the painting on the 10 [again, Los Angeles Highway (always busy)] & there it is sitting on the side of the Freeway. It might as well have been folded it was so perfect. We pull over & pick up the painting. As we are driving to the highway exit we hear a whoop whoop whoop. I had a flat tire. One of the wood chips from the painting’s frame had lodged itself right into my tire. The tire was flatten almost immediately.

So there we were fixing a flat at about 3am on Crenshaw. Crenshaw is not the safest spot in LA to fix a flat. A gentleman walks by looking down on his luck & says, ‘your lucky … flats can be fixed!‘. He was right. I drove the owner of the painting home & before we bid our good byes he unfolded the painting & we looked at it - still beautiful. Art, for the night, lived!

After scrambling to get my car fixed & other obligations, I didn’t have time for the lemonade picture post on Facebook but somehow I hoped that after sharing this story - it doesn’t matter. I think that recovering the painting was actually a better symbol & I hope that my friend feels the same. 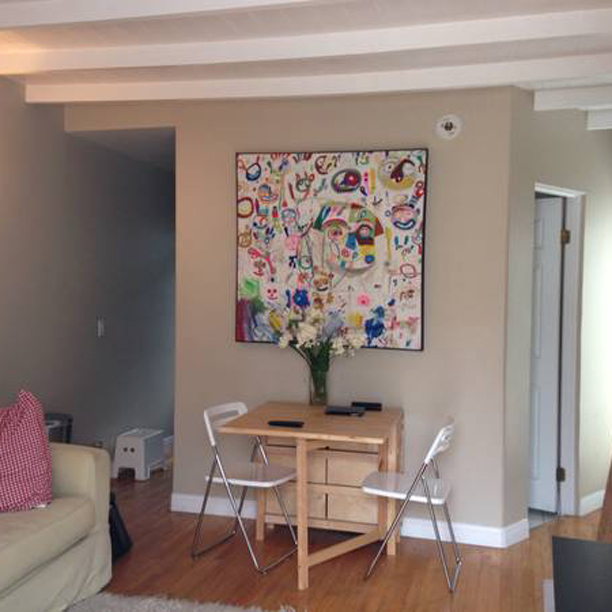